We decided to restart tot school (which now includes actual preschool activities, since Damien is older) for the summer! Damien has been asking why he isn’t in preschool anymore, and since I have this summer off I had some free time and do much better when we have planned activities (versus accidentally letting them watch a ton of TV), planning some themed activities seemed like a good answer.

Damien and I brainstormed some monthly themes for the summer and came up with: Ocean, Bugs, and Space (loosely corresponding to June, July, and August – by September hopefully Damien will be in a real preschool for at least a couple days a week, and we’ll have a new baby so my creativity levels will be zero anyway.) He wanted to do Ocean first, which makes sense because we’re going on a weekend to the coast with Dan’s mom in June.

I know this is totally unnecessary but because I am a planner (and also a teacher without a classroom – well, I have a bunch of classrooms but none that require me to actually lesson plan) I broke each unit down into mini units. For Ocean, we have:

For the entire unit, we had a few themed boxes that I made from things we had around the house:

Ocean Book Box (and these are all board books, since I’m leaving them in easy reach for our little book ripper) 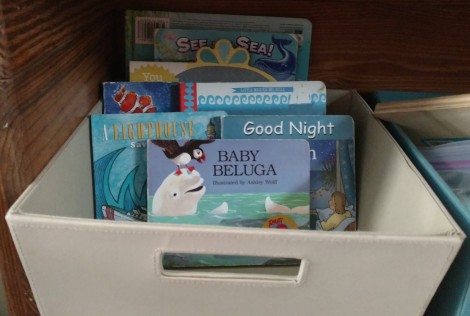 a Melissa and Doug peg puzzle, an ocean-themed jigsaw puzzle (we lost the box so I forgot the brand), a wooden octopus toy, a toy shark, a Lou Seal plushie (what can I say; we’re Giants fans) :), and a cuddly sea horse (it was Damien’s when he was a baby) 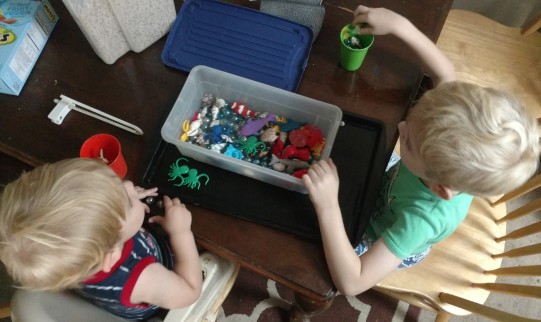 blue and white marbles (from the dollar store, otherwise I would have gone for sea glass), shells, miscellaneous fish toys (from the Coral Reef Toob and various Octonauts sets), and the octopi from a Barrel of Octopi (like a Barrel of Monkeys, but with octopi.)

Books (mostly from the library, which is why I kept them separate from our books – I didn’t want them to get wrecked!) This section got REALLY LONG and became its own post – find it here!

Table Work: (this was mostly for Damien, but Rowen was able to join in when he could)

Here’s how each mini unit went:

Sticking things in the ocean dough

The sensory bag was a lot of fun 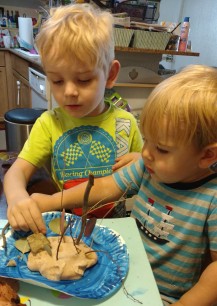 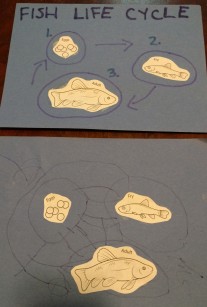 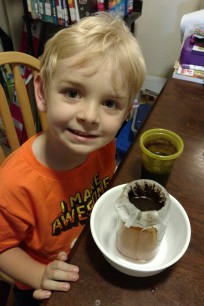 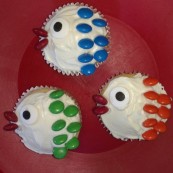 We did a shortened mini unit this week, because we were in the process of moving – I was sad to abandon such cute craft ideas, but I had to take our library books back before we left, so I decided it would be easier to just start a new unit after we moved. 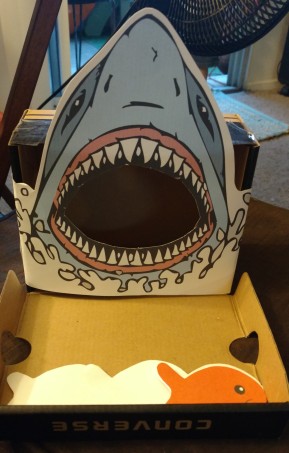 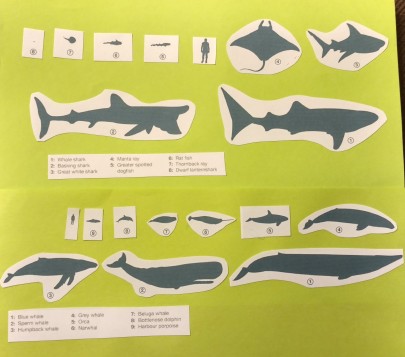